Know What is Eudora Email?

Eudora Email is a desktop based email client that can be used on Apple Macintosh, Microsoft Windows as well as Linux operating systems. The Eudora email also supports various palmtop computing platforms that include Newton, Palm OS, etc. Eudora was originally developed by Qualcomm but is now maintained by Mozilla Company though authorization remains with Qualcomm.

More About Eudora – Eudora is a wonderful email client that can be configured with IMAP, POP3 and SMTP protocols. It is a classic, fast, powerful, flexible, easy and effective email client that can filter spam precisely and hardly shows any weakness. Leveraging the statistical spam filter to organize emails is no doubt a good option. Some of Eudora's best features are the spam filter and fast search that are available only in the paid version. Over the years, the makers of Eudora found efficient and elegant solutions to just about all email problems that occured. 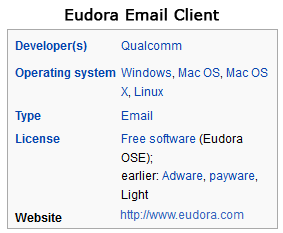 The various file formats used for files and folders in Eudora are mentioned below:

Eudora was developed by an individual, named Steve Dorner in the year 1988, who worked at the Computer Services Organization of the University of Illinois at Urbana-Champaign. The application was named after American author Eudora Welty, because of her short story: Why I Live at the P.O. Eudora was acquired by Qualcomm Company in the year 1991. In the year 2006, Qualcomm stopped development of the commercial version, and sponsored the creation of a new open-source version based on Mozilla Thunderbird, with the code name Penelope.

A number of versions of Eudora has been released and the chronological order of some of the versions starting from the latest version is given below:

Note: It works pretty well but does not catch all fraud attempts, so it still requires users to be alert.

From this page the details about Eudora is learnt. It should be known that Eudora has come to an end and its version 8.0.0 Beta 9 was the last version developed in 2010. Due to this most have switched to other email applications. Some also like to convert Eudora mailbox files to Outlook to make it compatible on Outlook.